While the brass band is not solely a New Orleans phenomenon, and the genre is not restricted to Black musicians, locally the practice has become a distinct form of Black creative expression over the last 150 years.

Following the Beat on the Street is a four-part video series that briefly explores the history of brass bands and their connection to parades and funerals. Rooted in tradition and fueled by innovation, New Orleans brass bands are the lifeblood of second lines.

The videos are narrated by THNOC Visitor Services Assistants Douane Waples and Dhani Adomaitis. Douane grew up in New Orleans, where he attended McDonogh 35 and NOCCA. He earned a music degree from the University of New Orleans. Douane has been a member of the Baby Boyz and New Breed Brass Band and currently plays with the Kings of Brass. Dhani grew up in New England and has called New Orleans home for almost 20 years. Her undergraduate degree and first master’s degree are from the University of New Orleans’s music program. She earned a second master’s from Florida State University in ethnomusicology—the study of music in culture.

Following the Beat on the Street was filmed in conjunction with the exhibition Dancing in the Streets: Social Aid and Pleasure Clubs of New Orleans and the 22nd annual Bill Russell Lecture, “When You Hear that Beat: Tradition and Change in the New Orleans Brass Band,” featuring Dr. Michael White, Gregg Stafford, and the Kings of Brass, sponsored by The Derbes Foundation.

Part One: Roots and Rhythms

The New Orleans brass band tradition got its start after the Civil War when military bands inspired the creation of numerous civilian bands in the city. These brass bands performed for a variety of events, including parades and funeral processions held by fraternal orders, labor unions, and benevolent associations. “Roots and Rhythms” traces these 19th-century roots of social aid and pleasure clubs’ annual parades and explores the rhythmic foundations that give today’s brass band music its distinctive sound.

The turn of the 20th century saw the introduction of new instruments, new sounds, and new playing styles that profoundly changed the musical landscape of New Orleans. “A Tradition Established” describes how these musical innovations in the early 1900s forged the sound, look, and feel of traditional New Orleans brass bands, setting the tone for the next 50 years.

By the early 1960s, the brass band tradition was at a point of transition, and some musicians worried that this would mark the end of the musical practice. Yet New Orleans brass bands flourished during the 1960s and ’70s. “A New Groove” explores the reasons that brass band music continued to thrive in the city and beyond—from the role of tourism to efforts to pass on the music to the next generation. By the late 1970s, young musicians creating new bands like the Dirty Dozen totally transformed the brass band scene.

Part Four: The Beat Goes On

Over the last 40 years, New Orleans brass band music continues to be marked by tradition and innovation. “The Beat Goes On” discusses bands that fall along this dynamic spectrum of playing styles, from the Original Liberty Brass Band and the Young Tuxedo Brass Band to Rebirth, the Hot 8, and the Pinettes. Today, bands play an essential role in New Orleans’s culture, energizing the streets on second line Sundays and playing for funerals, parties, and special events throughout the city.

Explore the history of second lines and social aid and pleasure clubs through our exhibition and book Dancing in the Streets.

Dancing in the Streets
By Dhani Adomaitis, Libby Neidenbach, and Douane Waples

In four videos, we chart the evolution if New Orleans brass bands from their Civil War–era origins up to the modern day. 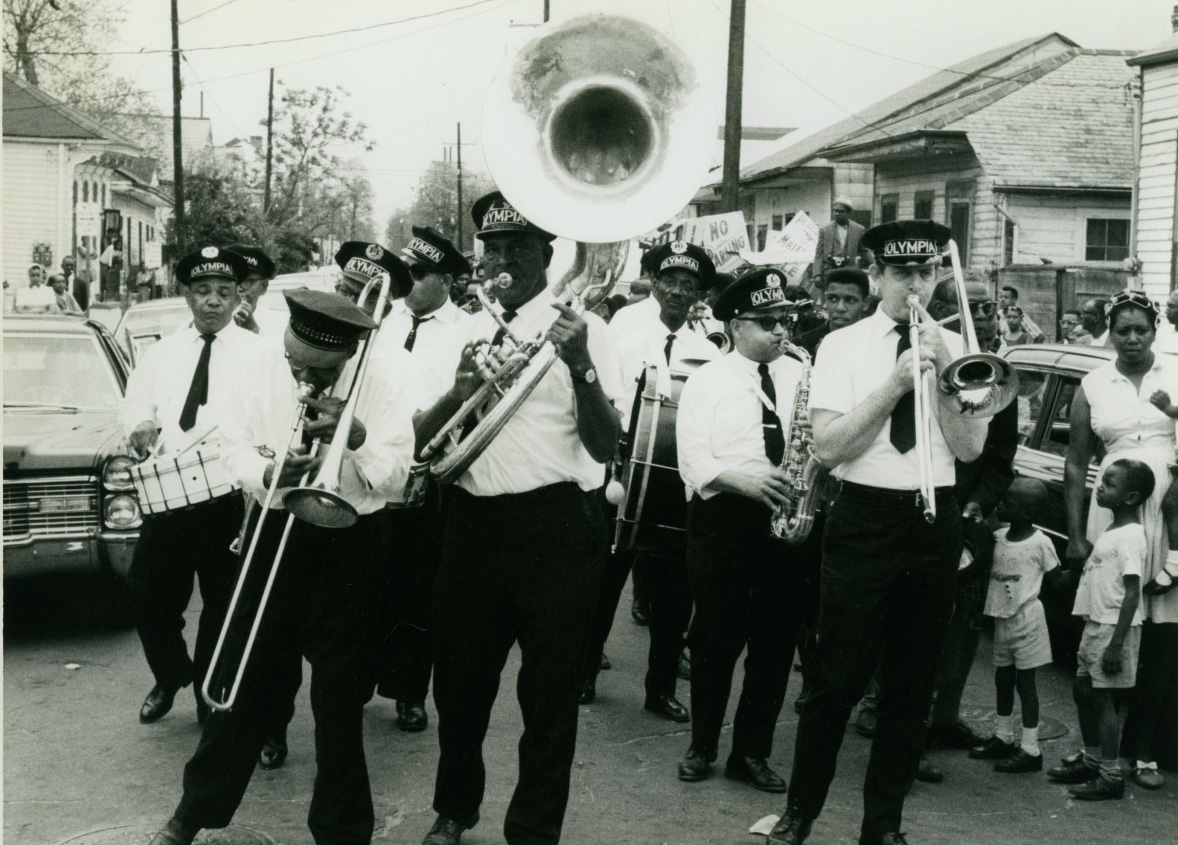