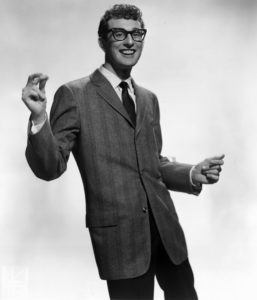 At about 1 a.m. on the morning of February 3rd, 1959, the chartered Beechcraft 35 Bonanza airplane carrying Ritchie Valens, J. P. “The Big Bopper” Richardson, Buddy Holly and pilot Roger Peterson crashed into a field north of Clear Lake, Iowa. This tragic event came to be known as “The Day the Music Died.”

Valens, Richardson, and Holly had just performed at the Surf Ballroom as part of the “Winter Dance Party” tour through the Midwest United States.

With the release of “That’ll Be the Day” in May 1957, Holly was now a celebrity. Richardson as “The Big Bopper” and Valens were solid up-and-coming artists in their own right.

Nancy Ransom Gerardi was at the Surf Ballroom for the show that evening. “Actually, this was a school night,” she recalls. “I went to teen dances when I was 13 and loved to dance. So, this was just a very exciting teen dance. It was particularly crowded that night, more so than other dances. You could wander up close to the stage and see them pretty well.”

“Buddy Holly actually played the drums for another band that lost their drummer. I don’t know if he was sick or didn’t make the flight, but he played for another group. I remember that was kind of surprising then because he was, you know, the star. It was exciting,” said Gerardi.

The story behind that “sick” drummer is a piece of the puzzle leading to that fateful plane crash.

The tour began on January 23rd in Milwaukee, Wisconsin, and poor planning had failed to account for necessary travel between scheduled performances. Unheated buses broke down, leaving Holly’s drummer with frostbite severe enough that he was hospitalized. Everyone suffered from sickness.

Frustrated, Holly chartered a flight in Clear Lake, Iowa to Hector Airport in Fargo, close to their next stop on the tour, Moorhead, Minnesota.

Richardson took bass player Waylon Jennings’ seat on the plane, and in a coin toss, Valens won Allsup’s seat — leading to a particularly fateful exchange that would go down in rock n roll legend.

When he heard Waylon would be taking the bus, Holly joked that he hoped it would break down, to which Waylon replied, “I hope your ol’ plane crashes!”

Piloting the plane was 21-year-old local Roger Peterson. The flight took off at 12:55 a.m. in deteriorating weather with light snow and 20-30 mph winds. Conditions were expected to worsen along the route, but Peterson did not know this.

When contact could not be established after repeated attempts, Hubert Jerry Dwyer, owner of the Dwyer Flying Service took a flight and in short order discovered the wreckage about 6 miles northwest of the Mason City Municipal Airport.

Nancy Ransom Gerardi remembers hearing about the tragedy the following day. “The next day it was it was extremely crushing to hear what had happened; you just couldn’t believe it. You knew for the rest of your life you would remember that you were there.

“The shock of it lasted for a while; it wasn’t just that moment.”

Contrary to popular lore, no name was ever given to the single-engine Beechcraft 35 Bonanza whose registration number was N3794N. The aircraft slammed into the ground at 170 mph, ejecting Holly, Valens, and Richardson.

When Don McLean referred to this powerful tragedy in early Rock n Roll History as “The Day the Music Died” in his 1971 hit “American Pie,” the name stuck and the event has been known this way ever since.