Art must neither be mundane nor artificial – it must be authentic, genuine and without taboo. Welcome to the new album of GRAUSAME TÖCHTER. The band presents another outburst of creativity and emotions. A wild rush of hedonism, lust and sadomasochism filled with surrealistic pictures. If you want to be kissed by the devil living in your own mind – here you go.

‘Zyklus’ is the 6th album of the band, true to themselves and still innovative. Are they pessimistic? Somehow. Depressive? Never. The concept of the album is intended to depict realism with an ironic wink. ‘Alpha’ und ‘Omega’, beginning and end, describes the origin of the world and its end. In this case, the creation of the world is not a divine master peace but the beginning of a never-ending cycle of mistake and destruction, a ruthless and dystopic view on human society. It shows human beings chasing their own tails in a treadmill of bad decisions. GRAUSAME TÖCHTER describe, comment and mock these tides of events. The lyrics are drastic and plain spoken but they are also deliberated and without bitterness. Instead, the band presents a lustful celebration of downfall and demise. The music is – as usual – hard to describe. It is a mixture of Techno, EBM, Electro Punk and Noise, garnished with surprising but still fitting elements of Baroque. Different from many other bands in the electronic genre the production is rich in depth, virtuoso and well-engineered.

There are two versions of the album: a regular one with 15 tracks and a limited edition with a bonus CD. Make sure you’ll get the latter. The bonus material would have deserved to be released as a separate album. A few years ago, Aranea Peel & The Bremer Salon Orchester performed a legendary concert at the renowned Kurt Weill-Festival in Dessau. The set list consisted of classic German Chansons and was euphorically taken by the audience. However, the songs have not been released on a CD so far. This made it the more pleasing that the songs are available now. In fact, German chanson can be quite evil which is a great fit with GRAUSAME TÖCHTER.

There have been many interpretations of the songs written by Friedrich Hollaender and Brecht composers Kurt Weill und Hanns Eisler. Maybe too many. In this case the new versions of these old songs are presented in an unscrupulous, authentic way. Which demands lust, spirit, devotion and experience with the dark side of the human mind. Peel here almost merges with the subject as it were her own songs which opens a whole new access to them. The production is opulent as well. The orchestra plays on a high-class level and Hans-Jürgen Osmers arrangements are top-notch. This is fine arts at its best. The visual element is an important part of the total artwork of the band as well. Let’s hope we will be able to see them live soon again. In the meantime, check out their latest music videos. 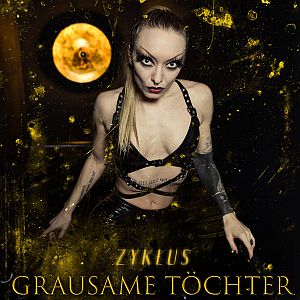