“We were as much on the outer internationally as we were in Australia,” says Ed Kuepper of his famous band, The Saints.

Ed Kuepper is far too modest for his own good.

The legendary Australian musician and punk rock pioneer is at home in Brisbane when I call him to chat about his return to live performance on his upcoming tour with Jim White from the Dirty Three.

The cyclone rock ‘n roll his band the Saints unleashed upon the world back in 1976 when they released their single “(I’m) Stranded” hit with the force of a Byron Pickett shirtfront.

The single, and the album of the same name that followed, shifted rock off its axis. It was punk before The Sex Pistols had unleashed their filth and fury on Bill Grundy’s TV show in the UK, igniting an era of anarchy and an army of cartoon copycats.

The Saints, along with the Ramones, were first. Everyone else was playing catch up.

Ed though, is not too fussed. He’s just glad he made a bunch of records of which he can still be proud.

“I don’t know about all that stuff (being punk’s originators) but I’m really proud of those records. They stand really stand on their own feet,” Kuepper tells Footyology.

It wasn’t really an influence on us and I don’t know how much we influenced it. We were as much on the outer internationally as we were in Australia.”

The Saints were part of vanguard of bands in Brisbane (along with the Go-Betweens) that were spawned amidst the oppressive reign of the Joh Bjelke Petersen regime. It was the age of the white shoe brigade, corrupt cops and property developers, bent politicians and brown paper bags full of dirty cash.

A great place to get the hell away from.

“It was exciting. We were on the outer bounds of what was acceptable. We knew it. It was really necessary to move out of Brisbane in those days, we wouldn’t have lasted as long as we did if we had stayed,” Kuepper says.

Being the eternal outsider has been Kuepper’s modus operandi his entire career, from the early heady days with The Saints, the genre-defying remit with the Laughing Clowns, the recharged rock of The Aints, and on through his solo career.

PLEASE HELP US CONTINUE TO THRIVE BY BECOMING AN OFFICIAL FOOTYOLOGY PATRON. JUST CLICK THIS LINK.

White is riding shotgun with Ed on this tour as they run through 45 years of the Kuepper back catalogue. Just a man, his guitar and piano, and his sidekick on the drum kit.

It’s sure to be different.

Kuepper had always admired Jim White’s work, so he did the obvious thing. He picked up the phone and put in a call.

“I heard that he was in Australia,” Kuepper says, “and so I got in touch. I’d been meaning to contact him prior to this, but we had both always been touring, so now just seemed like the right time.

“Every time I’ve seen Jim play, and I’ve seen him play a few times, he struck me as someone who, musically, I could relate to very easily. He and I have a similar approach where we’re able to just follow where the song takes us. It’s not something every musician does.” 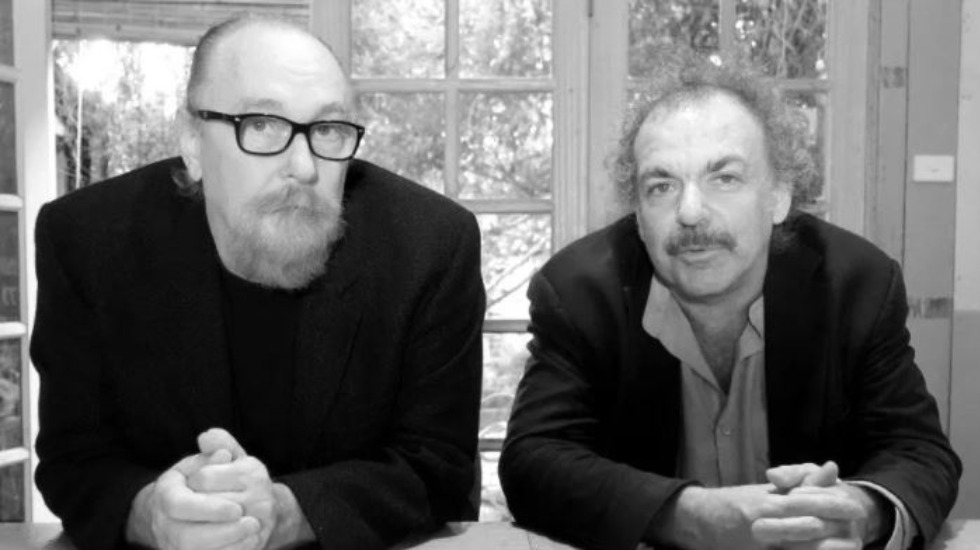 Ed Kuepper (left) and Jim White from the DIrty Three are about to hit the road on tour together.

Kuepper has never been afraid to push the boundaries. His post-Saints outfit, the Laughing Clowns, were fearless in their ability to blend the essence of punk rock energy with elements of the avant garde and jazz.

In a few short years, Kuepper had travelled at light speed from the buzzsaw power punch of punk to the outer edges of the new wave. As he reappraises the Laughing Clowns records in preparation for this tour, he’s even surprised himself.

“The funny thing is with The Laughing Clowns, I know we had a reputation as being the sort of freewheeling outfit,” he says.

The truth is that those songs were really tightly-arranged, they may have had sort of a section within that which was sort of open to improvisation, but if you go back through live recordings, I was astounded at how similar the performances were from night to night.”

It’s set to be a busy time for Ed. Coinciding with the tour will be a series of reissues of older recordings, including a live album from the Aints, a pair of albums from the Laughing Clowns (“Golden Days” and “When Giants Walked the Earth”) and an Ed Kuepper Singles set covering his output from 1986 through to 1996.

Putting together the singles collection has been a particular joy for the mercurial songwriter.

“The singles collection has been a bit of an eye-opener for me. I’d never actually listened to them all in order. It was actually a pleasant surprise. It actually seems quite cohesive given the time frame over which they were recorded. I was surprised by that.”

Still living a life of surprises. For Ed Kuepper, there is sure to be more to come.