How the Bahá’í Faith, a Persian religion built on peace, is changing the face — and music — of Mount Druitt – ABC News

How a Pacific Islander community — and a Persian-born faith — are redefining the reputation of one of Sydney’s most notorious suburbs.

The suburb 38 kilometres west of Sydney’s CBD has many names. Some are rapped with pride; others are wrapped in discrimination.

But two words rarely — if ever — associated with Mount Druitt are “purity” and “innocence”.

And yet, these are the qualities that Steven Maaelopa, a local of 25 years, perceives in his area. 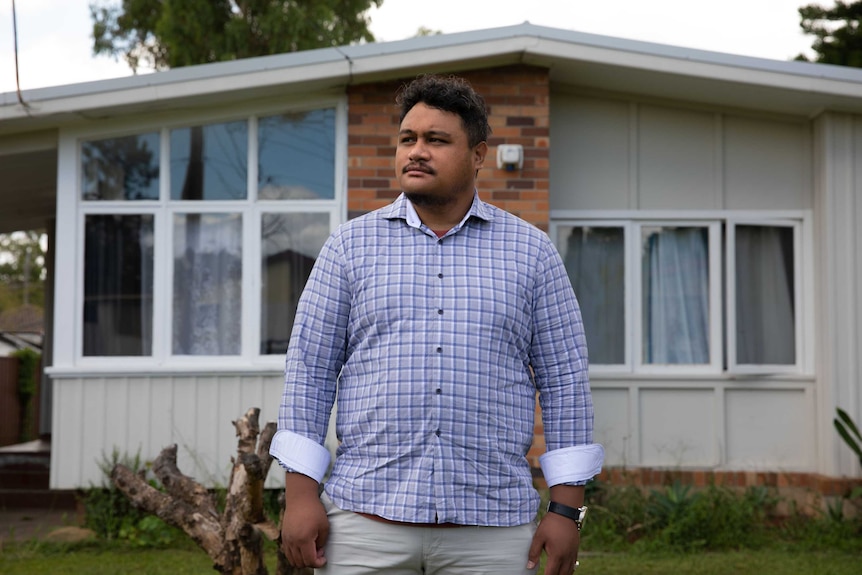 “Living in Mount Druitt you see a different side to it altogether,” he says.

“There’s this innocence and purity and, you know, sense of love and family.

“Unfortunately, there is also the dark side.”

The “dark side” Steven is referring to has been well documented in Australian media over the past decade. For Steven, the program’s depiction of life in Mount Druitt has had a lasting effect.

“Even going to places like Campbelltown, Liverpool or the inner city … when I share that I’m from Mount Druitt [people say], ‘Oh, you’re from Struggle Street.'”

“The documentary only picked out a few groups of people who do these types of things — like drugs and alcohol — and sort of blanketed it over the whole of Mount Druitt.”

A cycle of social ills

Twenty-year-old Moana Tauveve witnessed the struggles of her suburb first-hand while she was growing up.

From the window of her school bus and at the local shops, she saw homelessness, alcohol and drug abuse, and violence. But while some of her peers were sucked into this cycle, Moana vowed to forge a different future.

“Being brought up around that made me want to bring a positive change to our community,” she says.

“Especially for the younger generations, so they don’t have to grow up going through the same thing.”

Moana’s faith was a driving factor in her passion for social good. Both she and Steven are part of Mount Druitt’s small but ever-expanding Bahá’í community.

The Bahá’í Faith was founded in the mid-19th century in Persia — modern-day Iran. It’s rooted in values of equality, social justice and human rights.

Back in Sydney’s west, those principles have inspired a spate of activities — from holiday camps and homework support spaces to park rejuvenation projects — that are open to all.

And through these community-building activities, the religious community has grown. 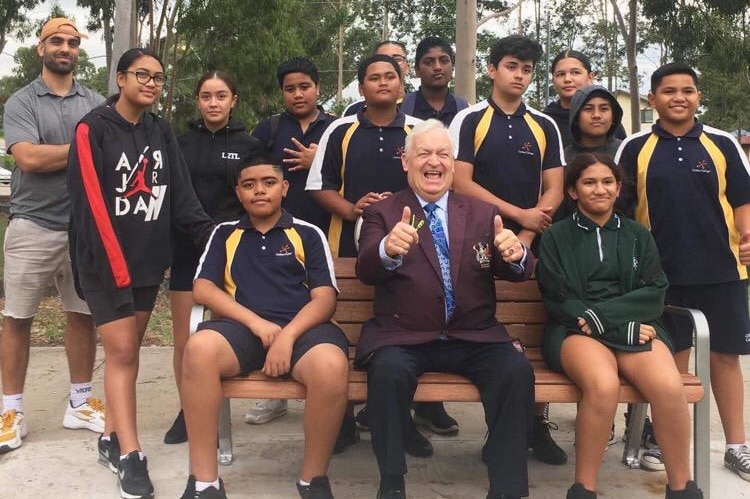 Steven’s parents were some of the first Bahá’ís in the area and, as an education coordinator, he’s grown up teaching local kids, including Moana and her brothers Leon and Hayze, about the faith.

Steven points out the aim has never been conversion — just 14,000 Australians identified as Bahá’í in the last Census.

Instead, he says, the extracurricular activities are about empowering young people to be the change they want to see in the community.

“A lot of my friends, they love the faith, but at the same time … their families have their own religion, as well,” Moana says.

Resistance to the religion

For many Bahá’ís in Mount Druitt, the religion arrived via the Pacific Islands.

Steven’s family comes from Samoa, where 97 per cent of the population identifies as Christian. “When my grandparents became Bahá’ís, back in the late 60s, they had pushback not only by the village, but also by their own family,” he says.

“They kicked them out from that village, and persecuted and abused them.”

Around the same time, the then King of Samoa, Malietoa Tanumafili II, also became Bahá’í.

Steven says the king deliberately embraced the Faith in a way that didn’t insult the culture of the community.

“He didn’t see a difference [between religions], and and I think that’s the same with Bahá’ís around the world — we see that all religions are one, and they all come form the same source.”

Indeed, Bahá’ís view Jesus as an educator or “Manifestation of God”. They also regard Muhammad, Krishna, Buddha, Moses and Bahá’u’lláh, the religion’s founder, in this same light.

But in the Faith’s place of origin, followers face state-sanctioned persecution.

Since the Islamic Revolution in 1979, Bahá’ís — Iran’s largest religious minority — have been banned from tertiary education. Academics from Iran’s Bahá’í Institute for Higher Education have been imprisoned.

The religion’s spiritual and administrative centre is located in Israel. In Mount Druitt, Steven says the religious community has faced some pushback by locals, too.

“Most of it comes from our own people, the Pacific people,” he says.

One family, Steven recalls, viewed it as a “fake religion”.

But later, after learning more about Bahá’í teachings, they eventually became allies and advocates of the Faith.

On the other side of Sydney to Mount Druitt, in the leafy, northern suburb of Ingleside, stands a towering nine-sided Bahá’í temple.

The number nine is considered a symbol of unity, as reflected in the architecture of Bahá’í “Houses of Worship”.

This temple, which was opened in 1961, serves all of Australasia.

For the Bahá’ís of Mount Druitt, the 58-kilometre journey means temple visits are rare, but Steven says locals don’t long for a bricks-and-mortar space of their own.

He points to a line from the Bahá’í Writings: “Any spot, where the mention of God is made, through prayer and service, is blessed.”

And so, each Friday between 40 and 60 people meet for a devotional gathering in Sydney’s west. It’s a night of song, prayer, discussion, even entertaining skits.

Some attendees are formally part of the Faith; others are allies.

Since COVID-19 restrictions, the community has gathered in Popondetta Park, but in a pre-pandemic world, Damoon Sheidai’s living room was always the meeting place. “Usually, Friday night is like party night, ‘get up to no good’ night,” says 27-year-old Damoon.

“Through the spirit that we’ve tried to create in these in these gatherings, people are attracted to that … it’s like, everyone wants to be part of something.”

The meet-ups, he says, offered an alternative for local youth, as Bahá’ís abstain from mind-altering substances, including drugs and alcohol.

Damoon’s living room became a refuge free of teenage temptations and of the harsh realities some attendees faced at home.

Many say music is the connective tissue that bonds this community together.

“When you ask a lot of the youths and children what’s their favourite thing about being part of this community, they say, ‘The music, the singing,'” says Steven.

But in 2770, music with a message isn’t limited to Friday nights.

“That’s actually where we all met, on Manifold Road,” says Damoon, who moved to the area a decade ago and now wouldn’t call anywhere else home.

Damoon jokingly calls himself the “odd one out” because of his Persian background, amidst an otherwise Pacific Islander crew.

But all are united their Bahá’í Faith, their love for Mount Druitt, and their desire to inspire and unlock the potential of younger generations. “I know a lot of friends who’ve gone down the wrong path,” says Jada, a 15-year-old vocalist and the youngest in the group.

“There’s a lot of troubles in the streets, especially in their homes.

“We’re just trying to show it’s not weak to speak.”

The power of words

Song by song, the group is addressing the injustices around them.

Their debut, Take A Look, identified problems in their area, such as domestic abuse, crime and drug abuse, while the follow-up was a call to action.

Manifold’s latest track, Dear Mounty, is a love letter to their neighbourhood, and a testament to the talent and resilience of its residents.

In the opening verse, Damoon raps:

Take a closer look around, there’s hope in the hood and the love is so profound

And if you live in Mounty, consider it a bounty

Mad love for the hood, for my town

Over the past few years, local outfit OneFour pioneered Aussie drill, a genre characterised by violent lyrics and trap-influenced beats.

Though they’ve won global recognition, they’ve also found trouble with the police. Multiple members are now in jail and performances have been banned in the name of public safety. 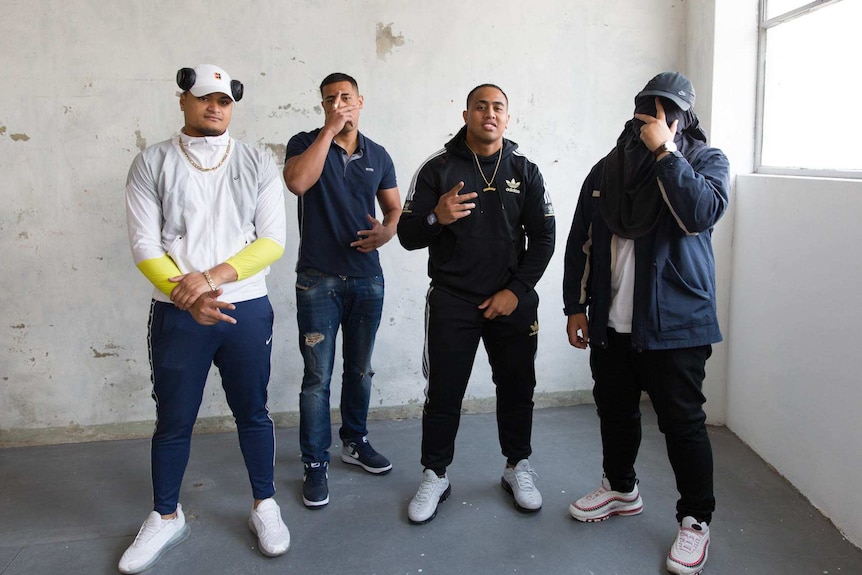 Moana says Manifold and OneFour can’t, and shouldn’t, be compared.

“We don’t think we’re better than them just because the message that we’re sharing is different,” she says.

Even so, Bahá’í elder — and dad to Moana, Leon and Hayze — Lalomilo “Milo” Tauveve is glad Manifold are creating a new narrative through their lyrics. “As a father … you do your best to raise them up to be good human beings, and hope that they can be those agents of change,” he says.

“And I’m very proud that they are using their talent to bring a positive message to our community.”

Manifold hope their music will reach far beyond the 2770 postcode. But as their lyrics make clear, their hearts will always be with dear Mounty.