Music programs in elementary and middle schools are on the line as the Greater Victoria School District plans its budget for the 2021-2022 school year.

In its proposal, the district identified a deficit of $7 million based on a decrease in revenue and increase in expense during the 2020-2021 school year. One of the areas with the most cuts are the district’s music programs.

All of the proposed cuts are “considerations, for the board’s deliberation [and] open to feedback before decisions are made,” the district noted in the proposal.

“It seems like the arts always get cut first and that’s really upsetting,” said Winona Waldron, president of the Greater Victoria Teachers’ Association (GVTA). “I understand why they’re looking at them but I think it would be a huge loss to the community and those teachers who have built up amazing programs at our amazing schools.”

Patrick Walasek is in Grade 7 and is part of the strings program. He says if it hadn’t been for the program, he never would have discovered his love for playing music.

Ukulele and fine arts (Vic Symphony/Vic Sings/Ukulele) will also be hit across the district under this budget, with a proposed cut of about $29,000.

One of the music programs funded by the school district is Island Ukuleles, an ensemble made up of more than 100 students across elementary, middle and high schools in Greater Victoria.

“It’s a big part of our children’s lives,” said Heidi Gayleard, president of Island Ukuleles’ board of directors. “My daughters have been in it since kindergarten and it’s been a big part in helping with their self-confidence.”

Now, students and parents are concerned the budget cuts could mean the elimination of their group’s only paid teacher, and that could mean the end of the program entirely.

Prael said she understands cuts need to be made but she hopes the district will revisit the proposal.

“To really look at what they are cutting,” she said. “I think music is a really important component of our children’s education.”

The president of the GVTA is echoing that, adding if the district has to make staffing cuts, to look at other positions that don’t work with kids.

“We have a lot of senior leadership positions at Tolmie. It’s grown exponentially since I’ve been involved with the union and the district and I think that’s where those cuts should come from,” Waldron explained. “They shouldn’t come from the people who work with kids, providing opportunities for kids. Band is what keeps some people in school.”

As of now, the budget has not been finalized.

Anyone who would like to share their thoughts on budget priorities can do so on an online forum set up by the district before 4 p.m. on  Monday.

The district trustees will review the budget proposal on Tuesday. 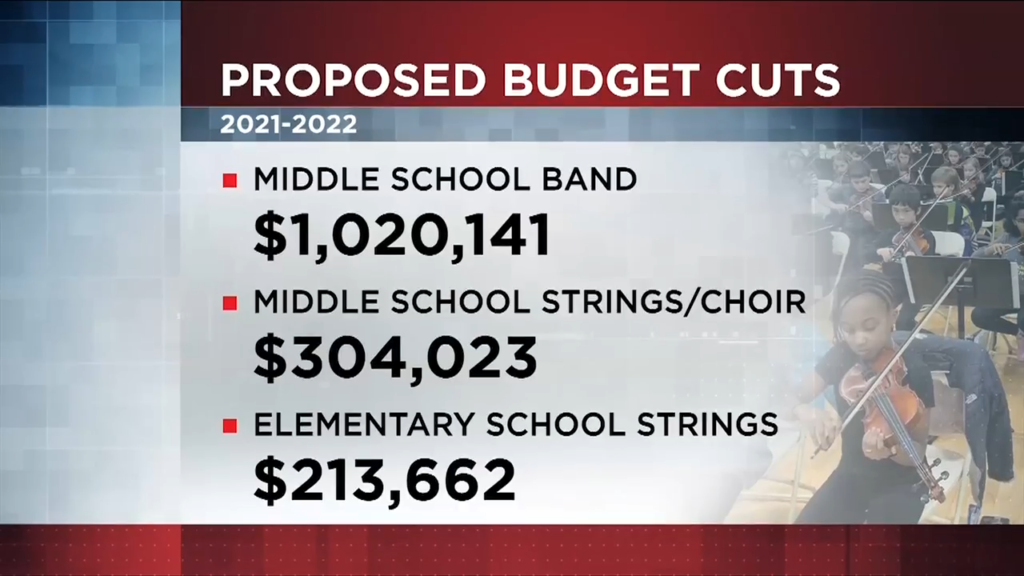 Facing a budget shortfall of $7 million, the Greater Victoria School District has proposed cutting more than $1.5 million from its music programs in a bid to find savings. (CHEK News)