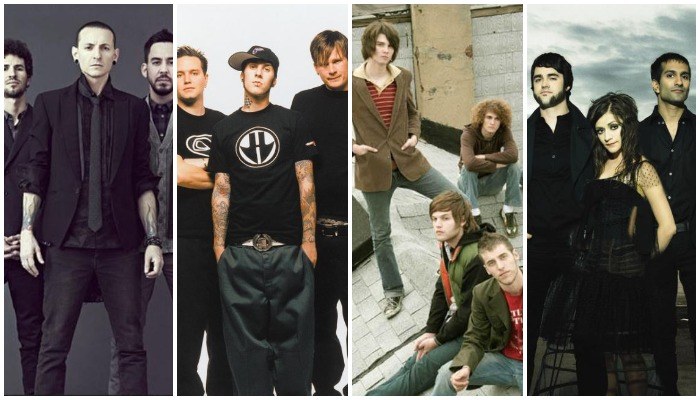 There’s a lot of pressure that comes with choosing a band name. After all, the last thing anyone wants to do is totally rebrand themselves mid-career.

As Jimmy Eat World taught us, a rushed decision has the potential to cause problems throughout an artist’s career. While most bands are fortunate enough to catch their mistakes early, some have had to part with their original names after already making themselves known.

Read more: MGK, YUNGBLUD and Travis Barker fight off zombies in “acting like that”

Here are 10 artists who put out music prior to assuming a new moniker.

The numeric portion of ‘s name has provided quite a bit of fun for the band. Over the course of their tenure, they’ve made up many ridiculous meanings to mess with speculating fans. Believe it or not, though, the band had actually released 1994’s Buddha under the name Blink. They had to change it the following year as another act were operating under the same moniker at the time. Ultimately, they just threw a random number against it.

We all know Hybrid Theory as Linkin Park‘s debut album. However, did you know that it was once their band name as well? Once Xero, the group opted to call themselves Hybrid Theory just prior to releasing their first EP. Ultimately, though, they decided that it was too close to the name of another active band, Hybrid. They eventually chose Linkin Park and titled the album as a nod to their foundations.

If you didn’t know about this switch, then you’ve got a whole new Billy Talent album to listen to. The group previously went by Pezz prior to receiving legal threats from another band using the same name. They released a full-length album, Watoosh!, in 1999 before the change.

Read more: 10 pop-punk artists who started out in a completely different genre

It’s hard to imagine Flyleaf operating under a less iconic moniker. However, the band went by Passerby long enough to drop a couple of EPs and go on tour. They changed their name shortly after signing with Octone Records, though, due to an inability to secure rights to the name.

Yeah, we were shocked, too… Prior to assuming the name Radiohead, the alt-rock titans went by one much more mundane: On A Friday. They produced a couple of demo albums before signing with EMI and taking on a new designation. Their now-permanent moniker is actually a reference to Talking Heads‘ “Radio Head.”

This is a more subtle one, but it’s well documented. If you take a look at the cover of New Found Glory‘s debut album, Nothing Gold Can Stay, you’ll see the original version of their name. The band previously went by A New Found Glory but dropped the determiner to make their physical records easier to find.

Read more: 10 pop-punk albums from the ’90s that set the path for the genre

Yeah, we prefer Nirvana… Kurt Cobain produced early demos under Fecal Matter that would eventually inform the band. After teaming up with Krist Novoselic, however, the project went through a series of names, including Skid Row, before they settled on the legendary moniker we all know.

We’re thankful for this change because it added some flavor. Prior to releasing Almost Here in 2005, the Academy Is… had actually gone by the Academy. In line with most of the other artists included in this list, though, they ran into complications posed by another band. The brief stint is immortalized on their debut self-titled EP.

Story Of The Year/Big Blue Monkey

Believe it or not, Story Of The Year existed for seven years before assuming their current name. First 67 North and then Big Blue Monkey, the band released three EPs under the latter. They ultimately changed it after—you guessed it—finding out that another band were already operating under the name.

It’s no wonder that PUP opted for this name change. During their early days, they performed under Topanga as a nod to Boy Meets World (and their first middle school crush). After two years, however, they realized that a Disney reference didn’t align well with their values and heavy style. The band then decided to go by Pathetic Use Of Potential, abbreviated as PUP, after Stefan Babcock‘s grandma used the phrase to criticize his musical ambitions.

Which artists do you know of that underwent name changes after releasing music? Let us know in the comments below!

The post 10 bands who had to change their name after already releasing music appeared first on Alternative Press.